She gently pushed at me with her horn. By now, I knew just enough about her to understand, and took a small step away from her calf. That’s all she was worried about.

Well, not really… She was also looking for a piece of fruit (a banana, if I recall correctly) that I had hidden on my person.

This was our little morning ritual: I would take her out with her calf, despite the freezing cold, because they both needed whatever exercise they could get. Even if only for a couple of hours, before spring came. And she would follow me, because she knew there was a little treat in it for her. But in order to make things more interesting, she had to find it herself, usually by sniffing me and poking in my pockets or boots with her flexible upper lip.

That frosty winter morning of 1989, the presence of two tons of Indian rhinoceros Rhinoceros unicornis, horns, muscle, bones, thick skin and all, only a short distance in front of me (not to mention the calf) did not make me nervous.

What did make me nervous was the fact that their usual zoo-keeper (an old and respected man in his trade) had honoured me by asking to take care of Basel Zoo’s four rhinoceroses with him some day before. And that very morning, he took a picture of me with one of the two female rhinoceroses and her calf. I never was very much at ease in front of a camera, so I fretted about it a bit before I put a piece of banana in my pocket. 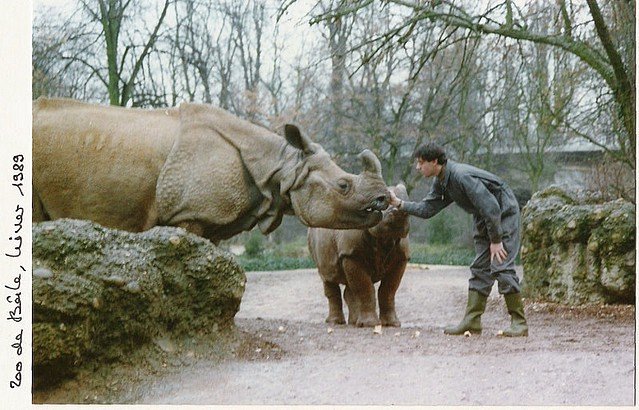 But now I’m glad I accepted: this is practically the only photograph I have from that period of my life. I just finished my high school and was waiting for my mandatory Swiss army recruit school to begin.

And in that key sabbatical year wedged between my innocent youth and my academic years, I had managed to travel, fall in love twice (although not with the girl who would later become my wife, but I did not know that yet), find a University I liked and being admitted to its biology courses and do a bit of travelling abroad in order to improve a foreign language.

Oh, and land what was to be a dream job during my studies: zoo-keeper!

That cold winter morning of 1989, that gentle giant of a rhinoceros mother was softly pushing me with her horn into my adult life.