The speculative-fiction webzine The Future Fire (TFF) celebrates its tenth anniversary in 2015. It does so in grand style, with a planned anthology (which you can help become reality), a blog carnival tour and lots of memories of possible futures.

In the context of the #TFFX anniversary celebrations, I had the pleasure of interviewing James Bennett, a British writer of Fantasy, Horror “and the odd contemporary fable”. A travel lover, James also has a keen interest in different cultures, history and mythology.

He’s had several short stories published internationally in the independent press, two of them in The Future Fire: “Lost Chapters: A fairytale” (TFF #4, 2005) and “Half Light House” (TFF #6, 2006). He recently signed with Orbit UK for the publication of his first major series.

James Bennett: I started out young. My earliest memories of writing, or wanting to write, were closely tied to the TV shows and films I used to watch as a kid. Batman, Wonder Woman, Star Wars & Doctor Who all played a significant part in firing my imagination, inspiring me to scribble down my own ‘tie in’ stories. I think the longest one was when I was 10 and I managed 300 pages of a Star Wars novel!

I wrote fairly consistently into my teen years, then stopped when I hit 20 or so, for one reason or another. I took up stories again aged 28 and got my first published story around the age of 30. So off and on, writing has always felt like a constant in my life.

JB: I’m very drawn to mythology. I like the idea of how myths impact on or conflict with the modern world. At least, that’s my ‘thing’ at the moment. I think it’s fair to say I’m also a little bit obsessed with death, not necessarily in a negative way. I suppose I’ve always been fascinated with the supernatural and the speculative field. I’m curious, if not exactly a True Believer.

Linked to all of this is a long held desire to portray diverse voices in my work as I didn’t grow up in a straight white world (or even a particularly western one) and I think it’s important that our art reflects the rich and vibrant gamut of the world we actually live in. Not a rant, just an outlook.

JB: I have written the odd non-speculative piece, articles and suchlike, along with straight up (ha ha) gay fiction and erotica. SFF remains my first love though. I like the freedom the field gives me.

I had a gay suspense novel “Unrequited” published in the US, which is just in the process of being reissued under the pseudonym James Nightingale (to separate that novel from my genre work). I also wrote a mini-novella “Practical Devil Worship (For All the Family)”, a satirical tale about a family of Satanists living in pious small town America. Fun!

Besides this, I’ve had a few short stories published now, around 20 or so in various zines and anthologies. Anyone interested in checking any of my work out can do so via my blog: jamesbennett72.blogspot.com.

JB: I tell myself that it won’t write itself. That’s my mantra. Then I sit down and write. I tend to start writing early in the morning, break for lunch, and then have a tidy up/edit in the early afternoon. Then I die on the couch.

You can’t always maintain this on a strict day-to-day basis. Life gets in the way. I’m a great believer in writing remaining a joy, not a chore, because that tends to show on the page. So while I’d say to any new writer don’t put yourself under too much pressure, I’d also say you have to keep an oar in the water at all times. And you get it done.

I’m glad I had some of my early stories in there and it’s great to see Future Fire reach its 10th anniversary!

JB: There’s a lot of freedom in this genre, I feel. I suppose there is in any genre to writers who love the themes and ideas therein. I guess SFF is the best pen in which I get to play with my toys, if that makes sense?

(Note from SKK: it totally does!)

JB: First and foremost, write. You’ll take many knockbacks if you’re serious, but try to see each rejection as part of the learning curve. Make learning the priority. Self-critique with brutal honesty. Don’t seek shortcuts. Become masochistic in terms of your words. No pain, no gain.

With any luck, in time, you’ll get where you’re going. But in my experience, there is nothing easy in this business and things that may look easy or a quick route to success at the time often turn out to be setbacks. 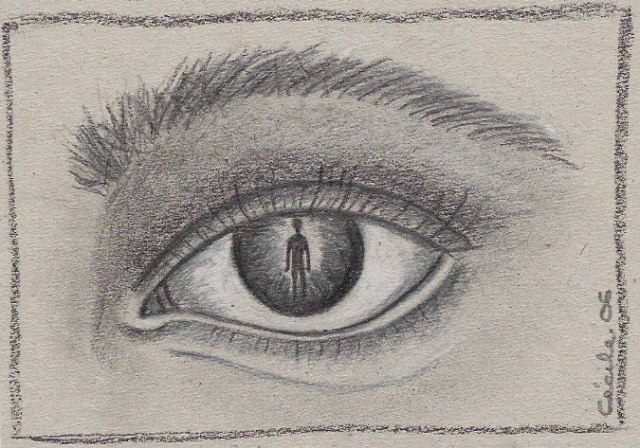 JB: Cécile Matthey is a great artist and of course I was thrilled. It was also my first published illustrated story, so I was doubly thrilled by that. I felt the images suited the mood of the story perfectly.

JB: I have 5 or 6 new short stories coming up in future anthologies from Fox Spirit Books, one of them (hopefully) a graphic story that draws on my childhood experiences in Africa. At the moment, I’m currently travelling in Europe and researching for my second novel in a fantasy series, the first volume of which comes out in autumn 2016 from Orbit Books. So I’m busy, but happy being busy.

SKK: Thank you very much “for playing”, James, and all the very best for your writing projects! I’m genuinely looking forward to read your upcoming fantasy series.

You can read more about James Bennett and his work on his website jamesbennett72.blogspot.com and you can follow him on Twitter @wytcheboy. You can also celebrate with us The Future Fire’s tenth anniversary by reading it, browsing the editor’s blog or following @thefuturefire.

And remember: you can support TFF authors and artists by pre-ordering the tenth anniversary anthology. If you wish, there are also numerous perks you can choose. Custom-knitted zombie doll in your image, anyone? Or perhaps a made-to-order illustration for your next novel, with a rare original sent to you? Right this way, please!

Some rights reserved: [cc by]. Illustrations by Cécile Matthey.